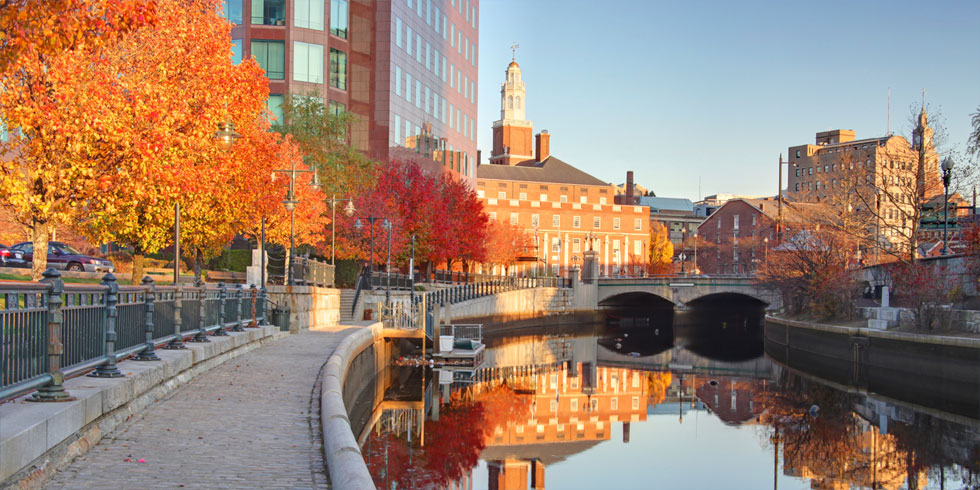 The Providence office is located Downtown in the historic Financial District, not far from the site of WaterFire Providence.  Across the river, you will find the Rhode Island Superior and Supreme Court building.  Our office is an easy five-minute walk from the Providence train station, which provides service for Amtrak, Acela and some MBTA commuter lines. It is about a fifteen-minute cab ride from the T.F. Greene Airport/ Providence (PVD).
There are several nearby parking lots located to the rear of our building, which can be accessed from Memorial Boulevard. They include Metropark, Central Parking and the Arcade Garage. There is also limited visitor parking adjoining our building with advance notice.
The restaurants in the City of Providence offer outstanding dining choices, from the famous, classic Italian restaurants on Federal Hill to Capriccio's and Hemenway's Seafood Restaurant, which are located across the street from our office. Other nearby choices include the Capital Grille, Flemming's, and Ruth Chris Steak House. Hanley's Ale House is a restaurant and sports bar for more casual dining. The Providence Place Mall, which is in walking distance, also provides several dining options.
The closest area hotels include the The Hampton Inn/Downtown( 58 Weybosset Street, Providence, RI 02903/ 401-608-3500), Marriott Courtyard Hotel (32 Exchange Terrace, Providence, RI 02903/ 401-272-1191), and the Omni Providence Hotel (One West Exchange Street, Providence, RI 02903/ 401-598-8000).

Providence is the capital and most populous city in Rhode Island. Founded in 1636, it is one of the oldest cities in the United States. It is located in Providence County, and is the third-largest city in the New England region. Providence has a city population of 182,042. The city is situated at the mouth of the Providence River, at the head of Narragansett Bay. The Providence city limits enclose a small geographic region, with a total area of 20.5 square miles.

Providence was one of the first cities to industrialize in the United States. By 1830, the city had manufacturing industries in metals, machinery, textiles, jewelry, and silverware. Though manufacturing has declined, the city is still one of the largest centers for jewelry and silverware design and manufacturing. Services, in particular education, healthcare, and finance, also make up a large portion of the city's economy. Providence also is the site of a sectional center facility, a regional hub for the U.S. Postal Service. Since it is the capital of Rhode Island, Providence's economy additionally consists of government services.  Over one third of Providence's economy is based in either trade, transportation, and utilities, or educational and health services.

Back to Office Locations